War for the Oaks was published back in the 80s, but I’m just now getting around to reading it as it is “one of the pioneering works of urban fantasy” (according to Wikipedia). It certainly lives up to the praise and I read it with the zeal of a fantasy lover. Here’s my review:

Emma Bull’s War for the Oaks was enjoyable and engaging, and I confess that I devoured it so quickly that I read the novel as a fan of fantasy stories, instead of a writer of fantasy. I thought a lot about what exactly it was that made Bull’s novel a “pioneer” for the genre, and I believe its because she is a master of creating new, interesting settings in common places and her pacing is very effective. There was no point in the story where I felt confused or pulled out because Bull was switching in and out of our world and the fairy realm; the two worlds overlaid each other seamlessly. I loved how Bull described even the most ordinary aspects of Minneapolis, such as the Nicollet Mall, which Bull compares to “the silver zipper in a patchwork coat of many dark colors” . In another example, Bull describes the orange street lamps as “faceless jack o’lanterns that gleamed on the sidewalks and reflected in the ruffled pond.”  I think Bull is a master of infusing old magic into ordinary objects, which is something I am attempting to achieve with my own novel. 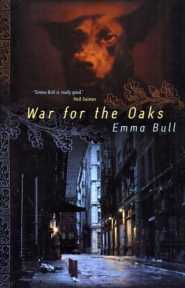 It’s a tough balance to strike.

Bull also created a diverse cast of musician characters. Her lyrical descriptions of how the band members practiced–experimenting with chords and blending their different instruments to create a single, coherent sound—really does seem like magic. As a reader who knows very little about making music, I was convinced that

Eddi had some sort of power. As a writer, I was impressed by Bull’s ability to convey the sense of sound through words. With the exception of Stuart, who comes across as a half-formed shade of a rock star, the other members of Eddi’s band are different and likable. The band’s familial relationships with each other felt strong and realistic. Though it didn’t affect my initial enjoyment of the novel, I felt that Bull could have done a lot more with fleshing out the backstories for all of the characters. When I finished the novel, I realized that I didn’t know that much about the characters, aside from what I learned during the events of the story. For example, how did Eddi and Carla become such good friends and maintain their friendship over the years? What made Eddi fall in love with Stuart and then back out of love again?

I liked that Bull chose a lesser known fey creature, the phouka, to introduce the fairy world; the genre already has a lot of fairy knights and elves. I assumed Bull had specific reasons for choosing the phouka, the Glaistig, and Meg the brownie, but this reasoning is never fully explored and some of those fascinating creatures play such minor roles. Why did Bull choose the phouka as a character rather than some other fairy creature since he rarely turns back into a dog? How did the phouka become involved with finding the mortal sacrifice? Why was it his responsibility?

Additionally, there was a lot left unexplained about the specifics of Bull’s fairy realm. Like a young adult novel, Bull’s story focused on Eddi’s journey of finding her own power and voice (literally and figuratively). Central to the storyline were Eddi’s romantic relationships with Stuart, Willy, and the phouka. The author probably could have filled several more chapters with lore and history, so maybe she made a conscious decision not to delve into that element of the story. However, it doesn’t stop me from wondering why the fairy folk were fighting over Minneapolis specifically? Does this kind of war happen all over the country? How did the fairies get to America from the Old World, or were they always here? As I said before, these unanswered questions didn’t prevent me from enjoying the novel, but they did make me think about if and when to share specific historical details and anecdotes in my own supernatural world.

Agree? Disagree? Have you read anything else by Emma Bull? Leave a comment below!